When spoken, accept and except can sound identical, so itâs no wonder that someone might confuse them in writing. Here is the difference:

Accept is to willingly receive.

Please accept this gift of appreciation.

Except indicates the exclusion of someone or something.

Everyone except John volunteered to help.

Leave a response to “accept/except”

Aside from the one-letter spelling variance, how do averse and adverse differ?

Adverse is negative or unfavorable; it is often used with effect or reaction, as in âan adverse reaction.â

The patient suffered an adverse reaction from the medicine he was administered.

Averse is to be turned off or repulsed by something.

Iâm averse to the idea of running a marathon.

Leave a response to “adverse/averse”

These words are often confused because of their related meanings but differing spellings.

Affect is a verb meaning “to influence.”

Effect can be both a verb and a noun. END_OF_DOCUMENT_TOKEN_TO_BE_REPLACED

Leave a response to “affect/effect”

Alter and altar can be easily confused because of their one-letter spelling difference. Usually writers know which meaning they want to convey, but they canât remember which spelling goes with which word.

Alter (with an âeâ) is to change or make something different. Altar (with an âaâ) has the religious meaning of a place of sacrifice or center of worship.

Hereâs a tip for remembering the difference between the two:

Alter is an action, so it requires effort; effort is a word that starts with the letter âeâ.

Leave a response to “alter/altar”

Though anecdote and antidote have very different definitions, they look and sound similar enough to be confusing.

An anecdote is a short narrative, often personal and used to illustrate a point.

Stand-up comedians often use humorous anecdotes as part of their shtick.

An antidote is something that remedies or relieves.

âConcentration is a fine antidote to anxiety.â â Jack Nicklaus

Leave a response to “anecdote/antidote”

Leave a response to “antidote”

Do you say anyway or anyways? Whatâs the difference between them? END_OF_DOCUMENT_TOKEN_TO_BE_REPLACED

Leave a response to “anyway/anyways”

The overuse of awesome in speech is a common occurrence. It is not an error, per se, but an overuse to the point that the word has become meaningless. Awesome is a perfectly fine word for describing something that inspires awe: a beautiful sunset, a majestic mountain scene, the Grand Canyon. Awesome is mostly used, however, is in response to ordinary, everyday, mundane interactions. Consider this exchange I had with a store cashier:

Me: âThat will be fine.â

There is nothing the slightest bit awesome about agreeing to have the receipt placed in the bag with my merchandise. I think my response was rather typical.

What is an alternative response to âAwesomeâ? In many cases, a simple âOKâ or âThank youâ will suffice. Even a response of âGood,â though also common, is a more appropriate response.

Letâs reserve the word awesome for things that are truly awesome. 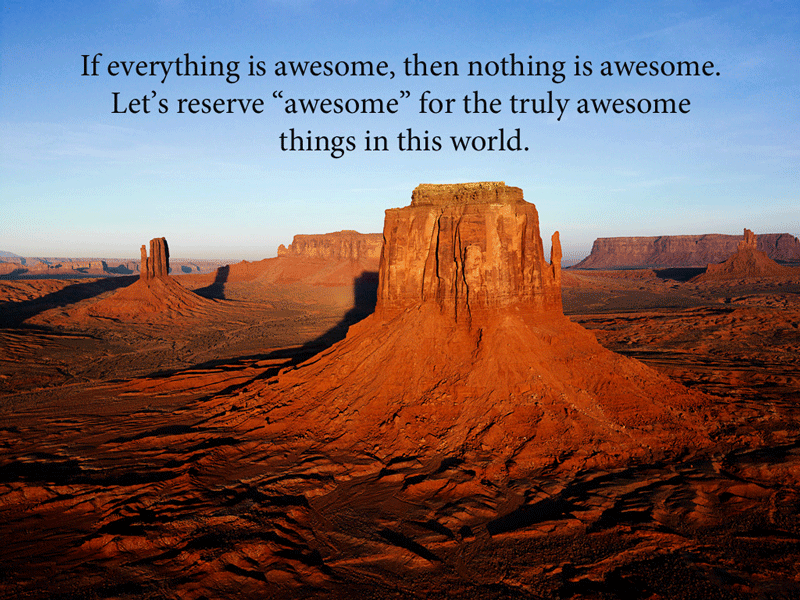 Leave a response to “awesome”

Adverb:
Awhile (one word) should be the choice when being used as an adverb in a sentence:
Stay awhile.

Though there is a difference between the two forms, itâs common to see them used interchangeably.

Leave a response to “awhile/a while”

Do you feel bad or badly?

Should you want something bad or badly?

Whether to use bad or badly can be determined by identifying the type of verb in the sentence and understanding how bad and badly differ as parts of speech.

END_OF_DOCUMENT_TOKEN_TO_BE_REPLACED

Leave a response to “bad/badly”